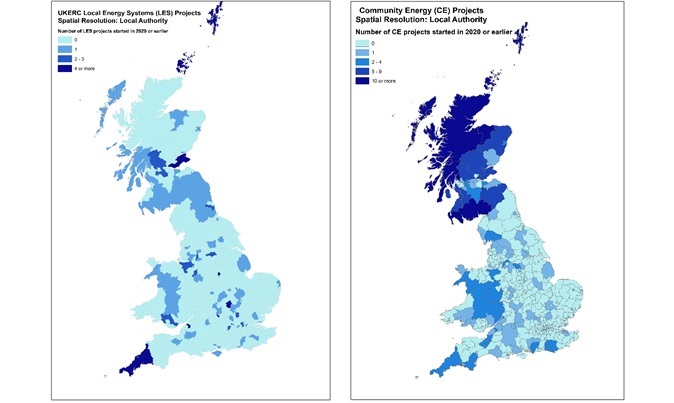 The map above shows the spatial distribution of 404 community energy projects and 147 energy system demonstrator projects at the local authority level in England, Scotland and Wales.

As the map above reveals is that most local authority areas have no projects, but Scotland, parts of Wales, and western England have many projects, often totalling tens of millions of mobilised investment.

Why do community energy (CE) and local energy system (LES) projects have these characteristic spatial footprints?

To answer these questions we’ve compiled quantitative datasets characterising a range of conditions that are potentially associated with local energy projects. These conditions are related to:

Wherever possible, we’ve collected data over the period 2010-2020 at the local authority level, and if more granular data are available, at the level of lower layer super output areas (LSOA). In the UK there are 380 LAs (mean population of 161,000) and around 42,000 LSOAs (including Scottish Datazones, with a mean population of 1,500). Some data were only available at a single or fixed time points so provide ‘cross-sections’ rather than time-series descriptions of the corresponding variable. Some variables we could measure in more than one way. For example, renewable power generation can be measured at the residential scale or at the utility scale, and in terms of numbers of projects or total installed capacities.

Using a range of econometric models, we were then able to test for significant associations between these variables describing local conditions, and our ‘outcome variable’: the presence of local energy projects. So far we’ve run these models at the local authority level using cross-sectional analysis (single time point), with additional time-series analyses to check the robustness of results under different assumptions. These models also allowed us to test for any spatial clustering that may be explained by ‘spillover’ effects through which one area is influenced by what’s going on in neighbouring areas.

Second, some of these conditions appear to be necessary or ‘threshold’ conditions associated with areas having an absence or presence of LES projects (e.g., older housing stock and fewer homes connected to the gas grid). Other conditions appear to be enabling or ‘intensification’ conditions associated with areas having many LES projects (e.g., cosmopolitan student areas with more renewable power generation). Distinguishing threshold from enabling conditions helps distinguish ways in which public policy can build capacity for all areas to participate in LES projects (distributional equity) from ways of targeting resources at high intensity areas (distributional effectiveness).

Third, there are a narrower set of local conditions significantly associated with CE projects, after controlling for the observed differences between Scotland and other parts of the UK (see map). This is also expected as CE projects tend to be less complex in terms of their technological and institutional configurations.

We’re still working on these interpretations of our results, but we think our approach demonstrates the value in using UK spatial data to analyse where and why local energy projects are implemented. Looking forward, this in turn helps understand the conditions necessary for local energy projects to flourish in the UK, including the type of ‘smart local energy system’ (SLES) project supported by the Prospering from the Energy Revolution programme.

For example, using UK spatial data can help to:

(4) Ensure a fair distribution of LES projects as part of regional development strategies;

(5) Share UK experiences with other countries through comparative analysis of LES spatial diffusion.

We’d be happy to share the datasets we’ve compiled to support these aims - just get in touch with Charlie Wilson at charlie.wilson@uea.ac.uk

Further information in this area can also be found in the EnergyREV report 'Common types of local energy system projects in the UK'.